Getting the Most out of WordPress via WordPress Plugins

If you’ve used WordPress at all, most likely you’ve had some experience with WordPress’s wealth of plugins. According to one source, there are nearly 30K plugins with one new plugin an hour.

These plugins extend the functionality of WP well beyond its original design and make its capabilities nearly unfathomable. While, I’m not foolish enough to say that WordPress can do everything, WordPress can do a lot. In fact, 74.6 million sites are run by WordPress. That number is staggering.

Plugins make this possible. Plugins took WordPress from a simple blogging platform to one of the most popular CMS’s available today. And all open source! 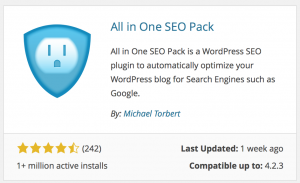 Not all plugins are created equal

So how do you make use of the wealth of plugins? If you’ve ever tried sifting through the plugin repository, you know that finding the right plugin can be a daunting task. Many are poorly documented, poorly written and straight up broken. (Plugin developers do NOT like me saying this.) When I am choosing a new plugin, on average I go through 4-5 plugins before finding one that works. I have little patience with them.

Here’s a few things I’ve learned about picking out a plugin.

1. Read the negative reviews. When I’m reading reviews, I go straight to the negative reviews. It may be a bit of a strange habit, and you do have to weed through a bunch of ranting people, taking their words with a grain of salt. Nonetheless, there is often grains of truth mixed in there. The negative reviews help you see what issues people have run into and learn from their experiences.

Secondly, avoid plugins with no reviews. These plugins are either untested, or worse, so bad their reviews were wiped out.

3. Check the last update date Is the plugin still being actively maintained? Does the developer have a presence in the forums? While no developer should be expected to provide carte blanch support for free, it is crucial to the success of a plugin that is actively maintained and updated along with the regular WP updates.

4. Follow WordPress bloggers Hacking vulnerabilities, new plugins and other WordPress news will be first reported on the WP blogs. Keep an eye on these and you will be in the know.

5. Move on! Don’t be afraid to move on to the next if one plugin is not meeting your needs. The competition is steep for plugins and there are plenty to choose from. Don’t waste time with bad plugins!

1. Having too many plugins. Each plugin has it’s own source code and will make calls on the server to pull in their files. This can add up quick and slow down your website. Deactivate and delete plugins that you are not using.

2. Not updating Updating protects you from common hacks and insecurities. Update often. Most hacking issues come from outdated sites or outdated plugins. Take advantage of the developers security precautions!

3. Not doing the research On rare occasions, plugins can contain malicious code and be the source of security breaches. Do your research on a plugin before installing.